Nigerian Singer, Buju has announced that his much-awaited new EP, Sorry I’m Late, will be released later this month.

Buju, who has had a fantastic year, is now ready to round off the year with a long-awaited EP, which he has finally revealed a release date for his adoring fans. On Sunday, October 3rd, 2021, he announced it on Twitter.

By his own standards, Buju has had a fantastic year.

First, he featured on Ladipoe’s smash tune Feeling earlier this year. The song quickly became an anthem, thanks in large part to Buju’s catchy hook.

The Singer went on to record his own personal track, Outside, which became an anthem as well.

However, The singer’s appearance on Wizkid’s Mood from the deluxe edition of the Made in Lagos album was the most crucial aspect of all.

He has since announced the title of his upcoming project, Sorry I’m Late, and has also provided a release date for the EP. 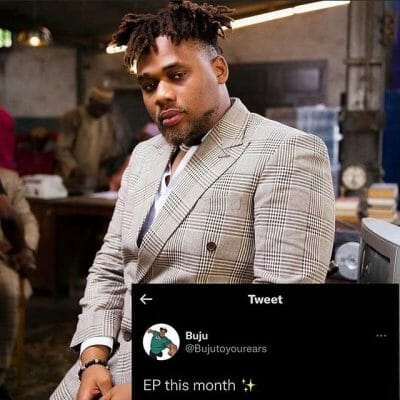 BBNaija: We Are In Love – Reality Tv Star, Emmanuel Speaks On Relationship With Liquorose