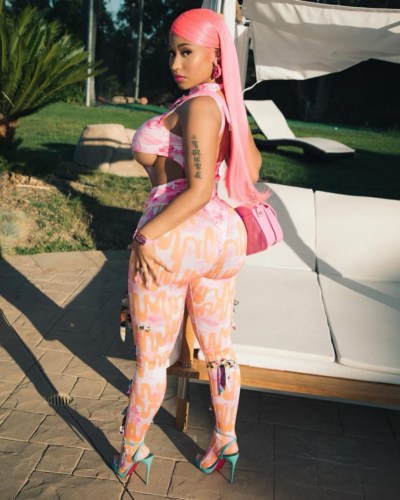 Following a long period of absence, Nicki Minaj returns to social media with full force. The rap goddess posed up with her baby daddy in recent photos and she accompanying with a caption that reads, My body Good. We all know that Nicki has got a killer shape, irrespective of how she got them.

I could still go to my hood— they know my body is good, another she said, “Yup yup bling bling if the watch out, tell’em watch out

The 38-year-old rapper took to Instagram to announce to her fans via her live video just before midnight on a Friday in the US to confirm Beam Me Up Scotty would be released on major streaming services, which is something she has never done before.

It’s no news that Nicki has been a high-flyer since the rerelease of her 2009 mixtape Beam Me Up Scotty, especially considering the album sold 80K units during its first week.

I love you guys so much. Thank you. Can’t wait to share my album with you real soon. It really just boils down to having the best FANS ON EARTH that rode with me 12 YEARS LATER.

Although Nicki has not given out any additional information, it appears she is ready for her fans.

See Her New Photos below

Related Topics:Nicki Minaj
Up Next

OlaDips Calls Out His Rich Selfish Colleagues, Slams Them For Refusing To Help